Mayweather vs McGregor: The Fight for Likes

Tomorrow night’s Las Vegas fight – possibly the biggest and most lucrative pay per view in combat sports – wouldn’t be happening at all if it weren’t for social media. Discover how social media hype has created the conditions needed for Floyd “Money” Mayweather and Conor “The Notorious” McGregor to get in the ring.

Some people are calling it the fight of the century. Mayweather is pound for pound the best lightweight in boxing history (49-0), while McGregor is the first and only dual weight UFC champion in history (21-3). This fight is set to either be an all-time great, with the interesting cross over from UFC to Boxing for McGregor, or a massive anti-climax (which many boxing pundits are claiming it will be).

How has this actually happened?

How do two men in two completely different disciplines, who have never met, end up standing toe to toe?
At what point did it become more than just talk?

And could this fight have generated this amount of hype 10/15 years ago?

The answer to all of these questions revolves around one thing – social media.

This fight would have been nothing but talk if it wasn’t for its social media build up, and the same could be said about Conor McGregor’s quick rise to super-stardom. His fame has come not just from his trash talking or his lightning left hook, but his ability to create highly engaging and shareable content… by just being himself.

“I would box him if the opportunity arose”

This throwaway comment on the Conan O-Brien show went completely viral, amassing nearly 5 million views on the Conan O’Brien YouTube page, with shares on other platforms giving it huge momentum. Although at this stage it was nothing but talk, social media got people thinking.

“They say he talk[s] a lot of trash and people praise him for it, but when I did it, they say I’m cocky and arrogant. I’m telling you racism still exists.”

This was the first time that retired Floyd Mayweather engaged with the idea of Conor McGregor, claiming that the difference in perception between the two fighters is about race, despite them being very similar.

“Floyd Mayweather, don’t ever bring race into my success again.”

McGregor responded to Mayweather’s comments through his Instagram account. This post gained over 257,000 likes and again was picked up by many sports-related Facebook pages and Twitter accounts. The exchange between the two was the start of an ongoing battle of words through social media. 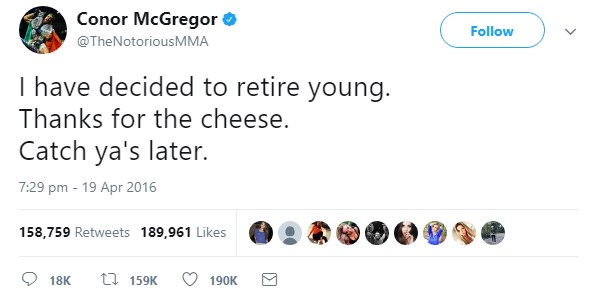 This came as a massive shock to fighting fans, and related to a dispute that McGregor was having with the UFC surrounding media obligations for UFC 200. This tweet made national news, reaching the likes of the BBC.

Of course, he very quickly came out of retirement. 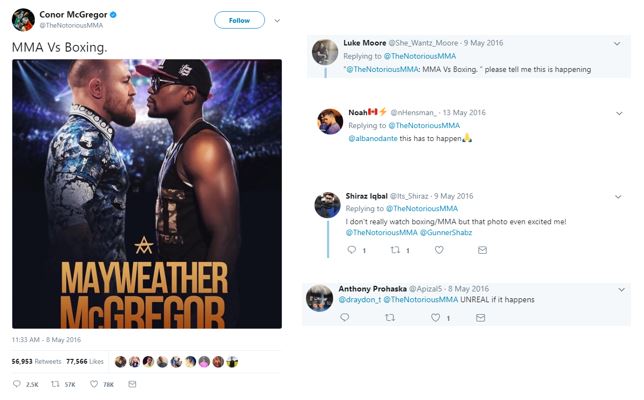 McGregor posted the above tweet, and it’s safe to say, the fighting world completely lost it! It’s a fan made poster, but many people actually believed it was the announcement of the fight. This image went viral and was covered by an array of social media channels such as The Lad Bible, Joe.co.uk and many others.

It was also in May that Mayweather admitted that he was a source of rumours that the fight may actually happen at some point in the future. Also, McGregor, during an interview on ESPN, claimed that Mayweather “needs” him.

At this point in 2016, the fight might never have happened if it weren’t for social media. There was a lot of posting back and forth from the two athletes, mainly trash talk, and this is what kept the momentum ticking over.

This was a massive moment in the Mayweather vs McGregor journey – a huge statement from McGregor that sent fans into a frenzy. There was a lot of coverage online, although McGregor didn’t post about it himself. 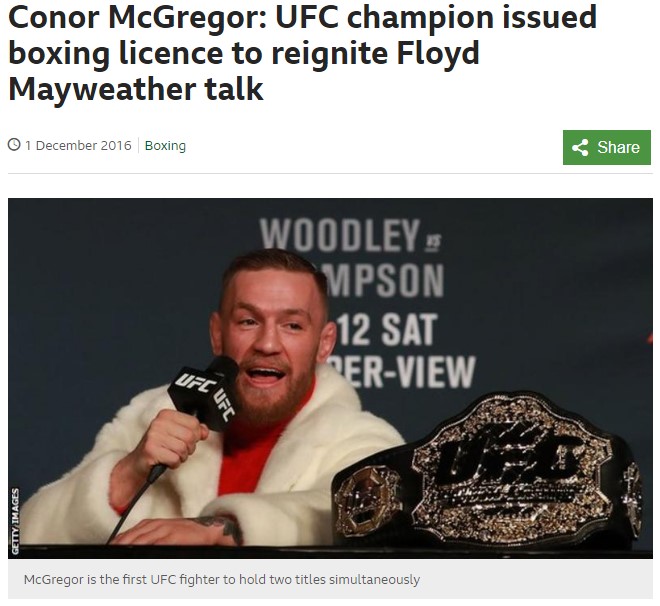 It was in January that verbal offers started to be bounced back and forth, with Mayweather counter-offering McGregor’s demand of $100 million with $15 million and a pay per view cut, while Dana White (UFC President) weighed in with an offer of $25 million for each fighter.

It was also in January that McGregor, in true McGregor fashion, decided to make things personal, pointing towards Mayweather’s history with C.J. Watson.

At this point, the two athletes had never come face to face – everything had gone on online and on TV. The fact that Mayweather announced he was coming out of retirement just to fight McGregor, shows how much of an impact social media had had.

In an interview after the Michael Conlan fight in New York City, McGregor yelled “I am boxing!” at writer Dan Rafael ringside. He said he’d shock the world with Mayweather’s defeat.

May 2017 – Negotiations get serious

In May, Dana White and McGregor agreed new terms for a boxing match with Mayweather, and the fighter decided to have another dig at Mayweather through his Instagram account.

Floyd Mayweather and Conor McGregor agree terms to fight in the T-Mobile Arena in Las Vegas on the 26th of August 2017. The fight is on! 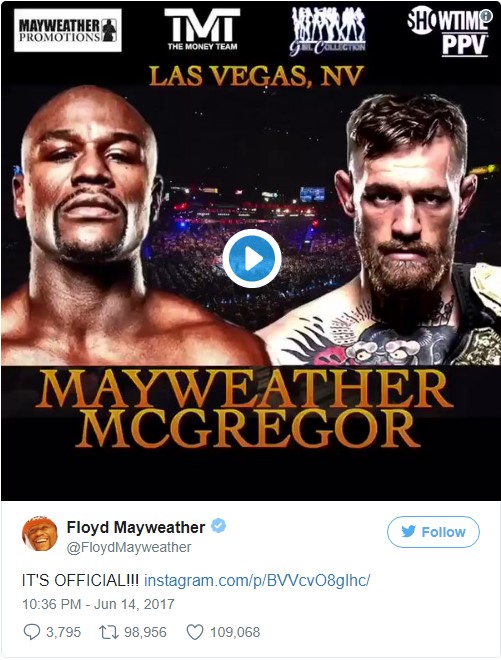 There it is, the century’s biggest fight and possibly the biggest in history. Who’s to blame? Well, social media of course. Without the followers, comments, shares and the overall viral nature of social media, this fight would have been a Chinese whisper – a quick “what if” conversation over dinner. With the fans and the online hype, it was built up enough for the big cats to take notice and as they say “give the fans what they want”. 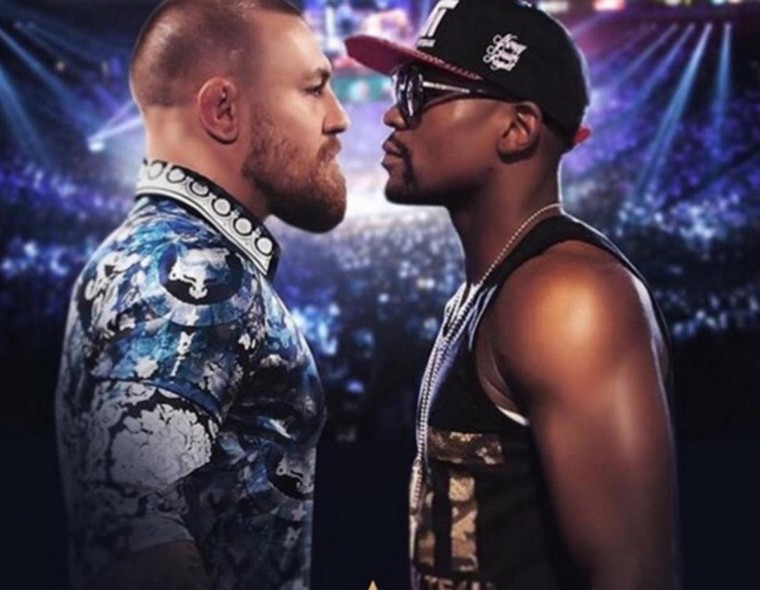