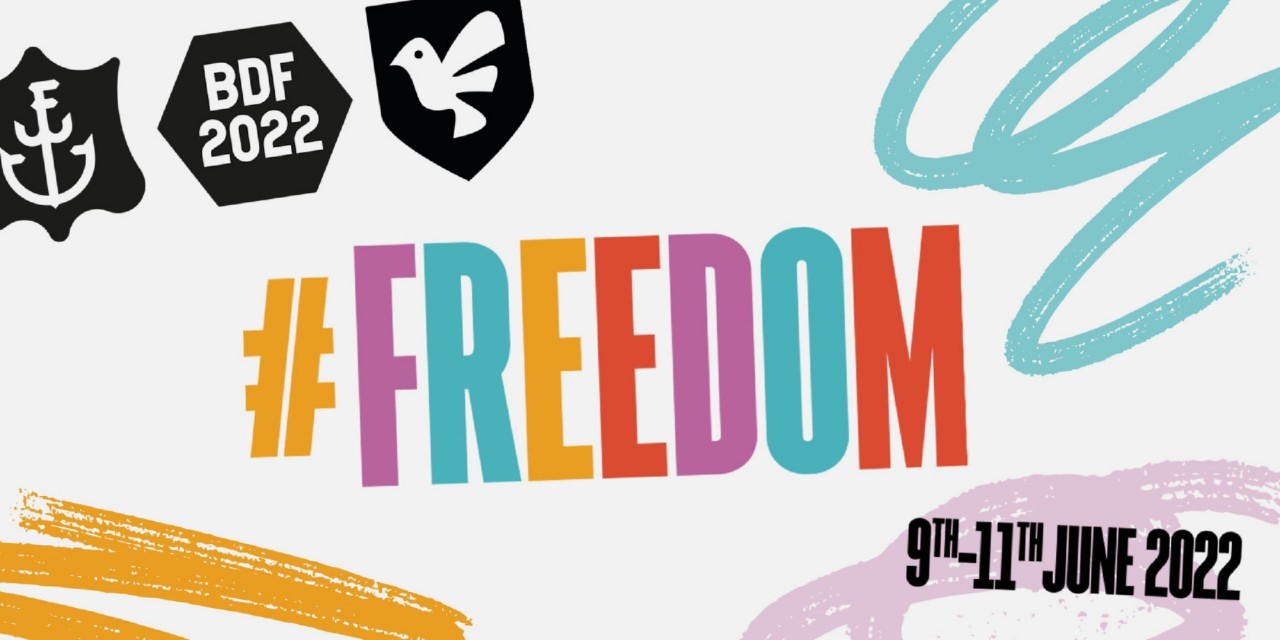 We thought this would never come round again, having been postponed during the pandemic so Chris and myself were very much looking forward to what the Design Festival had in store for us this year.

Comprising of a collection of speakers, spread across the Birmingham University campus, the BDF offers a chance to break out of your own particular bubble and catch up with others within the creative industry to see what’s been going on and hopefully learn a thing or two.

What follows will be a recap of the four talks that we were fortunate to see, hopefully you’ll find them interesting too. 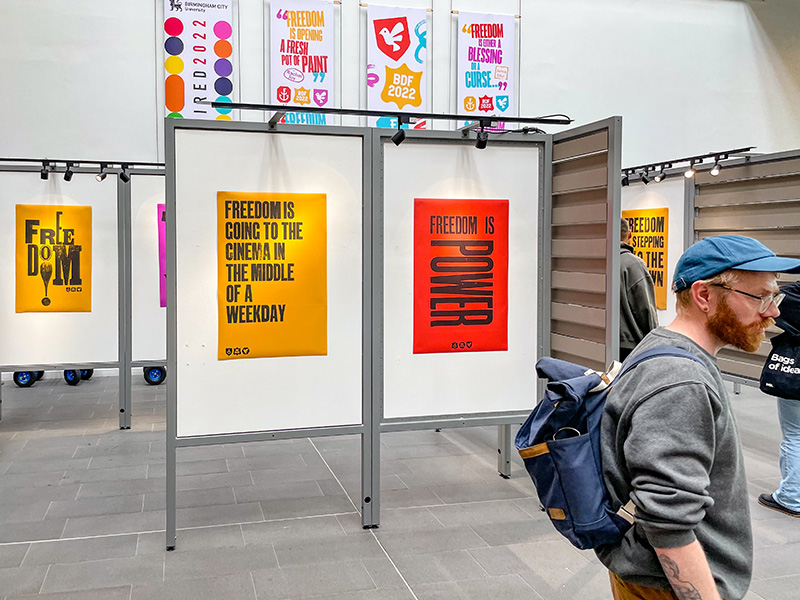 It was great having Shaun Loynds on as the first speaker because his charisma, bounciness and ability to captivate acted as the perfect caffeine free pick me up. Which, uncoincidentally is what Shaun’s talk was all about, what with him being a self professed master at this stuff.

Shaun has been around pretty much all of the big studios, and worked all over the world, as we later found out while taking a walk through Birmingham with one of the festivals directors, so his secret to success, which essentially is what this is, is worth it’s weight in PANTONE 16-0836 TCX (or gold if you’re not a design geek).

Shaun was able to rational that 75% of everything a person is able to achieve is down to their energy rather than their talent and that by ignoring the negativity in your life and focusing on the most positive possible outcome, you can generate more and do it better (to put it simply).

A perfect anecdote for this was given about a time when Shaun’s team had been working 14 hour days for 2 weeks and one evening, just before the client left them, he said “See you tomorrow, I’ll be back at 9:30 and I expect to be impressed.”

Obviously this was a bit of a kick in the stomach for the creative team who had been working so solidly on his project, so Shaun gathered them round and, in a thick Blackburn accent, said “look, we can all be pissed off and moan about how we’ve missed our tea and haven’t slept for two weeks. Or, we can give it until 10, forget what the brief says and go and do something that we would each do if this was our brief.” (Or something to this effect).

Needless to say, ditching the brief, acknowledging the negative and then moving on from it broke their creative block and fired them all up. The work they produced exceeded all expectations and more than impressed the client.

So by ignoring the naysayers and people who don’t say good morning back, Shaun offers us a chance to master our own energy and creative output. 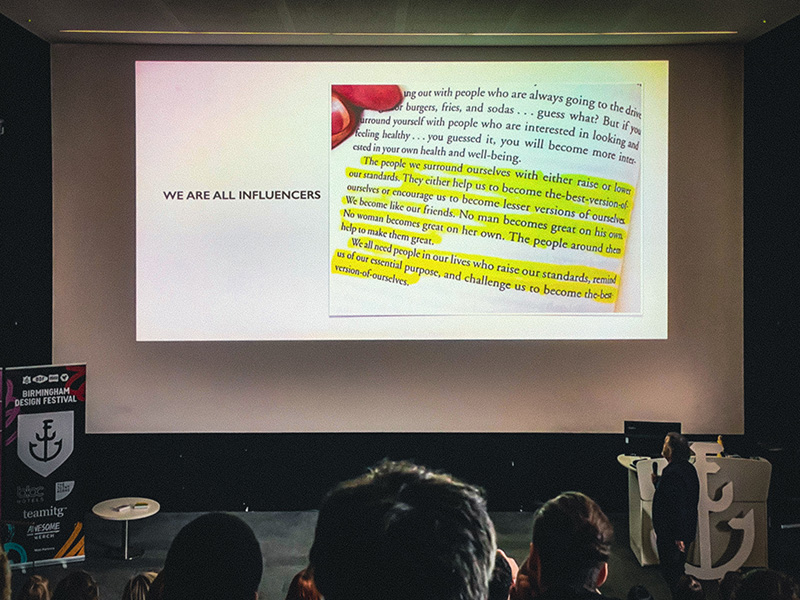 Matthew began his talk by showing us an impressive show reel of work that his stylistic design agency had produced, and then flatly announcing that he won’t be talking about any of that stuff.

Instead, Matthew lead us on a journey starting with how our consciousness affects our world, what it means to be conscious and how it can create influence. Even citing the famous double slit experiment which has baffled scientists for years due to how the effects of a conscious observer changes the outcome of the experiment.

The more we think about something, the more ‘magnetised’ we become to it, was Matthew’s conclusion to that segment and illustrated it with a series of images that he had generated of ‘discarded street sofas’, after becoming overly aware of their sudden appearance on the streets of his London suburb. This idea of magnetism lead on to Matthews life long passion for all things space related, NASA and the moon and how an internal passion project at Accept & proceed landed NASA as their client.

These passion projects, brought about by magnetism and how our consciousness relates to the physical world continue to act as a part of Accept & Proceed’s marketing strategy and help to give insight into Matthew’s thinking behind his creative process (they even have a gallery space at the front of their studio, how cool is that?). 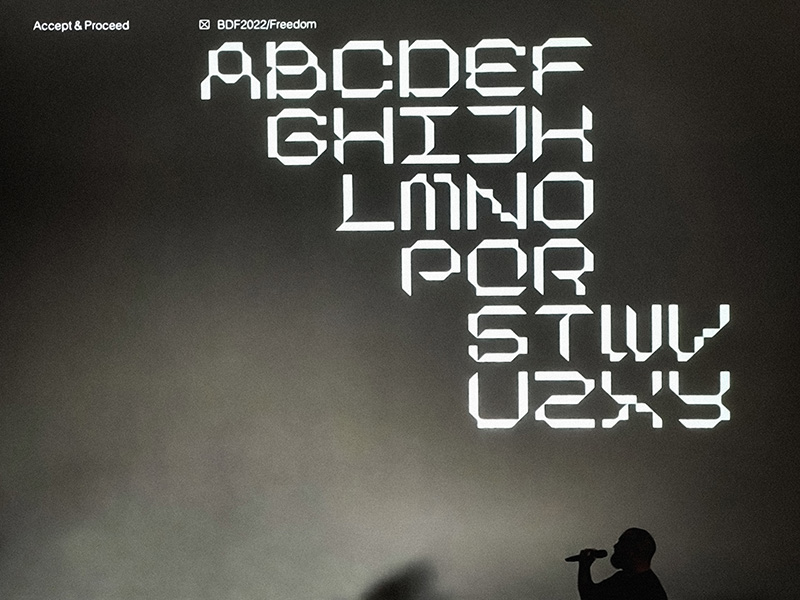 Similar to the speakers earlier, Liam comes across as a totally unassuming, down to earth and unpretentious lovely chap. But as you start to peel away the layers, you realise that he’s an artistic genius.

Liam found a love for materials and the way things are made by taking apart old VCR players when he was a kid. Later he moved onto restoring an old Lambretta scooter which taught him how materials work, how they can form different shapes and basically, how to become a master of the 3D world!

Quite often, Liam’s meandering talk would take you through seemingly unassuming scenarios, such as when he took his sun into his studio on Saturday because he wanted to make a dinosaur all the way to how he made him an 8 foot T-Rex which led on to any number of commissions and building a full size Skoda out of cardboard.

Like with the other speakers, Liam’s energy was impressive. As well as how his willingness to be open and experimental has led to commissions that created his best work. 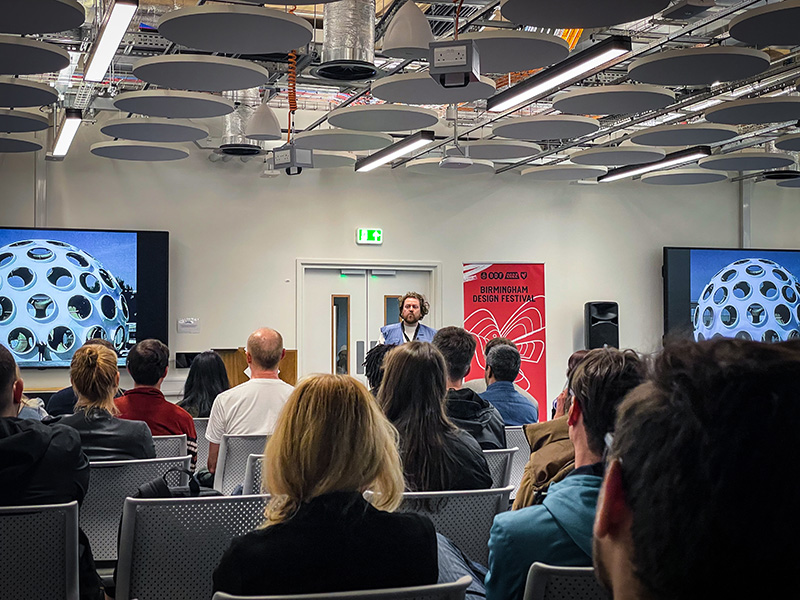 Pacing Information Flow in AAA Games: From the Open Worlds of Horizon, to the Sandbox That is Battlefield V
Ahmed Salama: UX Director at Ubisoft Stockholm
Innovation Birmingham Campus: 4:00pm

Ahmed Salama, the last speaker of the day would have turned the heads of any computer game nerd, having been the UX lead on many of the biggest games of the last 10 years, from Kill Zone, to Battlefield and his unique insight on how UX translates to these game designs was of special interest to us.

The talk started with a segment on ‘Presence’, described by Ahmed as “A psychological state or subjective perception in which part or all of an individual's current experience is generated by and/or filtered through human-made technology.” He likened this to the experience we have while talking on the phone and closing our eyes to simulate being in the room with the person we are speaking to. This is an important concept for game creators to consider when developing experiences and it can help them to decide how ‘leaned in’ or ‘leaned out’ an experience needs to be based on what a player is doing.

What followed was a series of slides that helped to explain the relationship between an action’s urgency and how removed from the game a player should be. Ahmed broke down the key interfaces that a game could have and how each of these actions could be distributed across them in order to balance the level of presence appropriately.

From our point of view, this rings true to how the levels of distractions should diminish as you proceed through a website’ sales funnel. Making the user more present and able to think about what their purchase means to them, rather than distracting them with other information, kind of like a third person interjecting while you’re on the phone. 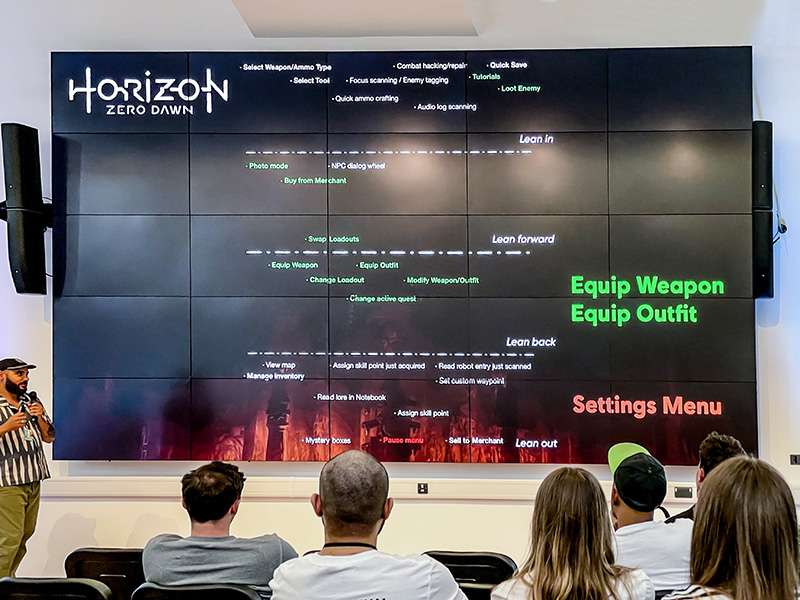 So from energy and positivity, the importance and value of being freer creatively and being mindful of presence, Birmingham Design Festival 2022 gets the thumbs up from Clear.